In August 1939, Nazi Germany and the Soviet Union entered into an alliance under which, among other things, the two countries agreed to divide the territory of Poland between them and give the Soviet Union a free hand in the Baltic States, including Lithuania.  In June 1940, the Soviet Union took control of Lithuania and soon after absorbed the country.  At that same time, group of former Lithuanian diplomats, led by Lithuania’s former ambassador to Germany in Berlin, established an underground network of Lithuanians in the country that were called the “Lithuanian Activist Front” (“LAF”).  Working with the Nazi leadership, instructions and manifestos were secretly distributed to LAF members in Lithuania.  Among them was a general plan to stage an “uprising” in Lithuania that would coincide with the inevitable Nazi attack of Soviet-controlled territory. One such directive was titled, “Instructions for Liberating Lithuania,” which made clear that it was “necessary” for the “conceptual maturity” of Lithuania to use the opportunity that would be created by the Nazi invasion “to also get rid of the Jews.”

The Nazi attack began on June 21, 1941 and the LAF immediately announced the creation of a Provisional Government.  The LAF members in the field wore white armbands and therefore are to this day known as the “white armbanders.”  They quickly took control of the country and, particularly in northeastern Lithuania, ruled their locales well before the German forces arrived.  An early proclamation issued by the Provisional Government officially declared that the Jews of Lithuania were henceforth beyond the protection of the law.

Throughout Lithuania, Jews were tormented, robbed, and killed in spontaneous acts of violence.  The Germans then directed the systematic round-up of the Jews and confiscation of their property.  Lithuania’s Jews, estimated to have numbered about 220,000 in June 1941, were herded into squalid, cramped places of detention, euphemistically called “ghettos,” and most were murdered within the span of a few weeks.  Since the Jews and their property were no longer protected by the law, the partisans were free to do whatever they wished, without fear of consequences, although at one point the Provisional Government expressed disapproval of violence taken against the Jews in public places.

In the Rokiškis region, which at the time included Svėdesai to the south and Panemunėlis to the west, local LAF members arrested the Jews in the region’s towns and villages for temporary confinement and transport the detention area that was established on the grounds of the Tyzenhaus manor in Rokiškis, from which most were shot to death at nearby killing sites.  In at least two instances, however, the arrested Jews never reached the Tyzenhaus detention area.  The LAF partisans isolated 28 of the more prosperous Jews from Svėdesai for transportation under guard to Rokiškis but robbed and murdered them several kilometers south of the Tyzenhaus in the Trakas woods.  In the village of Panemunėlis, several kilometers west of Rokiškis, the extended family of local pharmacist Naum Olkin, including his daughter, the rising Lithuanian Jewish poet Matilda Olkinaitė, were similarly isolated for separate transport to the Rokiškis detention camp but murdered en route near the village of Kavoliškis, at a place now called the “Olkin-Jofe” site.

By happenstance, before the murder of the family of Naum Olkin, the diary and notebook of poems of his daughter Matilda were given to their friend, Father Juozapas Matelionis, the priest in the Panemunėlis Church, who hid the diary and notebook in a secret compartment of the church’s great altar.  In the 1980s, the church’s organist transferred them discretely to Professor Irena Veisaitė, who is herself a Holocaust victim, for continued safekeeping.

Since murders such as these occurred near rural farmsteads, in many cases the victims and the perpetrators were known to local residents.  During the repressive Soviet era (1944-1990), any discussions of these murders were usually in hushed tones among trusted relatives or friends.  However, toward the end of the Soviet era, some local residents began to speak openly of the need to recognize the site of the Olkin-Jofe murders.

November 20, 1986, affidavit of local resident about the location of the July 1941 Olkin-Jofe murder site. 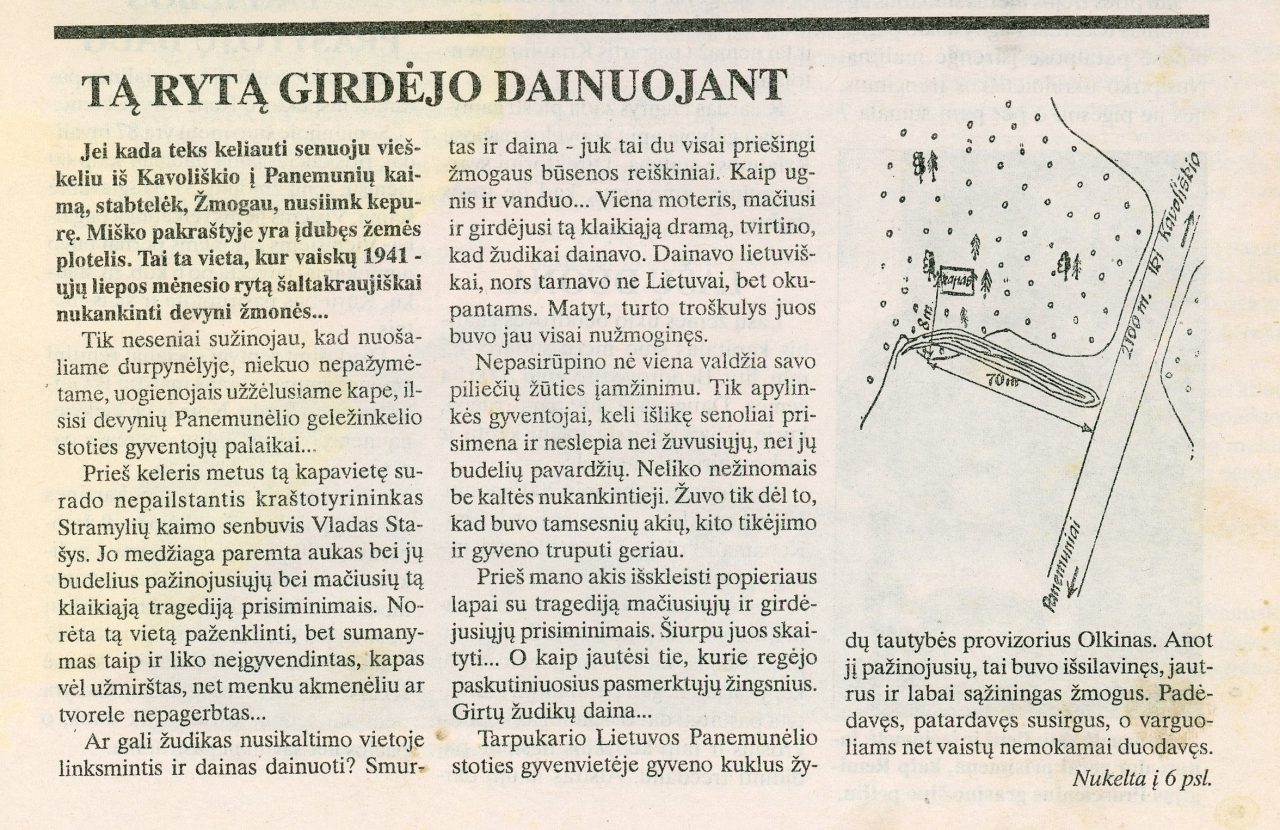