The well-known political cartoonist Al Jaffee, who was born in Savannah, Georgia, in 1921, lived in provincial Lithuania from age 6 to 12.  At the request of the Zarasai Regional Museum, RLI created placards with Al’s depictions of inter-war Lithuania. 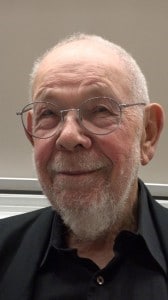 Al Jaffee is best known as the American political cartoonist who has contributed to MAD Magazine since the 1950s.  Although he was born in Savannah, Georgia, in 1921, from 1927 to 1933 he lived in provincial Lithuania, in his mother’s native town of Zarasai.  His mother was murdered there in 1941. Al has never returned to Lithuania.

A few years ago, Al’s friend, Mary-Lou Weisman, asked Al if she could like to write a biography of his life.  Al, accepted on the condition that he would create the illustrations.  In the book, which was published in 2010, half of the illustrations reflect his memories of his memories living in rural Lithuania.  Since Al never returned to Lithuania, all of his images of life in inter-war Lithuania are unaffected by subsequent events and changes.

In 2013, Phil and Aldona Shapiro donated copies of the book to the regional historical museums in Zarasai and Rokiškis and to the library of the U.S. Embassy.  In March 2016, the director of the Zarasai Regional Museum, Ilona Vaitkevičienė, asked Aldona if arrangements could be made to create a collection of posters of the images in the biography pertaining to Al’s childhood years in Zarasai. This request was presented to Remembering Litvaks, Inc., which agreed to obtain the necessary copyright approvals and to sponsor the project.

In the process of getting the necessary copyright approvals Phil Shapiro received word that Al wanted to speak with him. They spoke for nearly an hour about inter-war Lithuania and about Al’s mother, who was still in Zarasai in the summer of 1941 and presumably was murdered with the other Jews of Zarasai and nearby shtetls in the Krakyne Forest northeast of Degučiai. (In view of Al’s unusual circumstance of having been a young Jewish American who lived for several years in Lithuania during the inter-war period, the U.S. Holocaust Memorial Museum accepted our suggestion to interview him.)

The exhibition of his illustrations opened on September 2, 2016, the day of European Jewish Culture, at the Zarasai Regional Museum.  For the opening of the exhibition, Al’s biographer, Mary-Lou Weisman, issued an open letter to the people of Zarasai which stated, “To me, the existence of this exhibition is a double-triumph – the re-creation by Al Jaffee, through art and memory, of the rural Lithuanian town that has since been forever changed by war; and the determination of the museum director and the people of modern Zarasai and their leaders to embrace their history.  In Zarasai, the book, at last, has found its true home.”

Since first being displayed in Zarasai in September 2016, the set of illustrations have been shown in various venues in Lithuania, including museums and libraries in Biržai, Dusetos, Kavarskas, Molėtai, Ukmergė, and Vilnius.  On March 13, 2021, Al Jaffee celebrated his 100th birthday.  For the occasion, the American caricaturist Tom Richmond created an image of Al standing over a huge birthday cake with 100 candles — and holding a fire extinguisher!  (See the second image in this article, https://www.washingtonpost.com/arts-entertainment/2021/03/13/al-jaffee-100-mad-magazine/.)  Later in the year, the Zarasai Regional Museum rededicated the posters at an event attended by the regional mayor and other local officials. 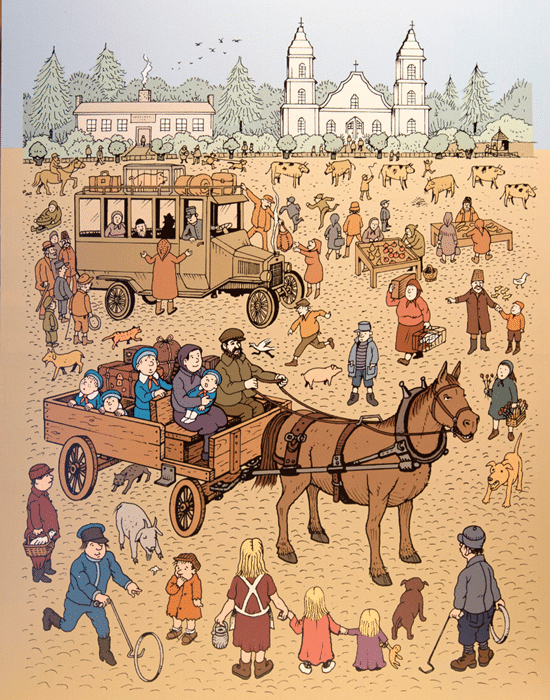 This drawing depicts Al Jaffee’s memory of the day in 1927 that he (standing in the cart) arrived with his mother and three younger brothers in the town square of Zarasai (then, Ežerėnai).  Since Al had not returned to Lithuania since he left in 1933, his memory of the square was not influenced by later changes.  In 2013, the people of Zarasai were delighted to see his images of the town from the inter-war period.

Mary Lou Weisman’s Open Letter to the People of Zarasai

Announcements of the Exhibitions in Zarasai, Molėtai, and Ukmergė

In September 2017, Professor Samuel D. Gruber, a prominent American art and architectural author, historian, and historic preservationist, viewed the Al Jaffee exhibition in Ukmergė.  He posted his impressions on his blogsite. 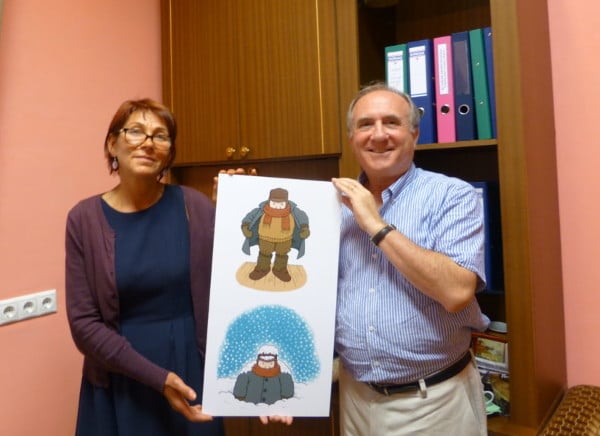 Ilona Vaikevičienė, the director of the Zarasai Regional Museum, proposed the creation of a set of illustrations from Mary-Lou Weisman’s biography, Al Jaffee’s MAD Life, that could be exhibited throughout Lithuania.  She is shown here with RLI’s Phil Shapiro holding Al Jaffee’s illustration of “Winter in Zarasai.” 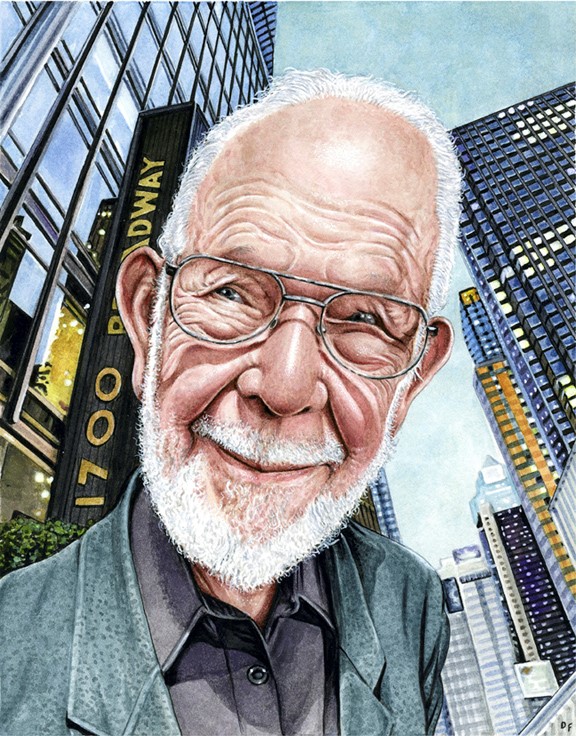 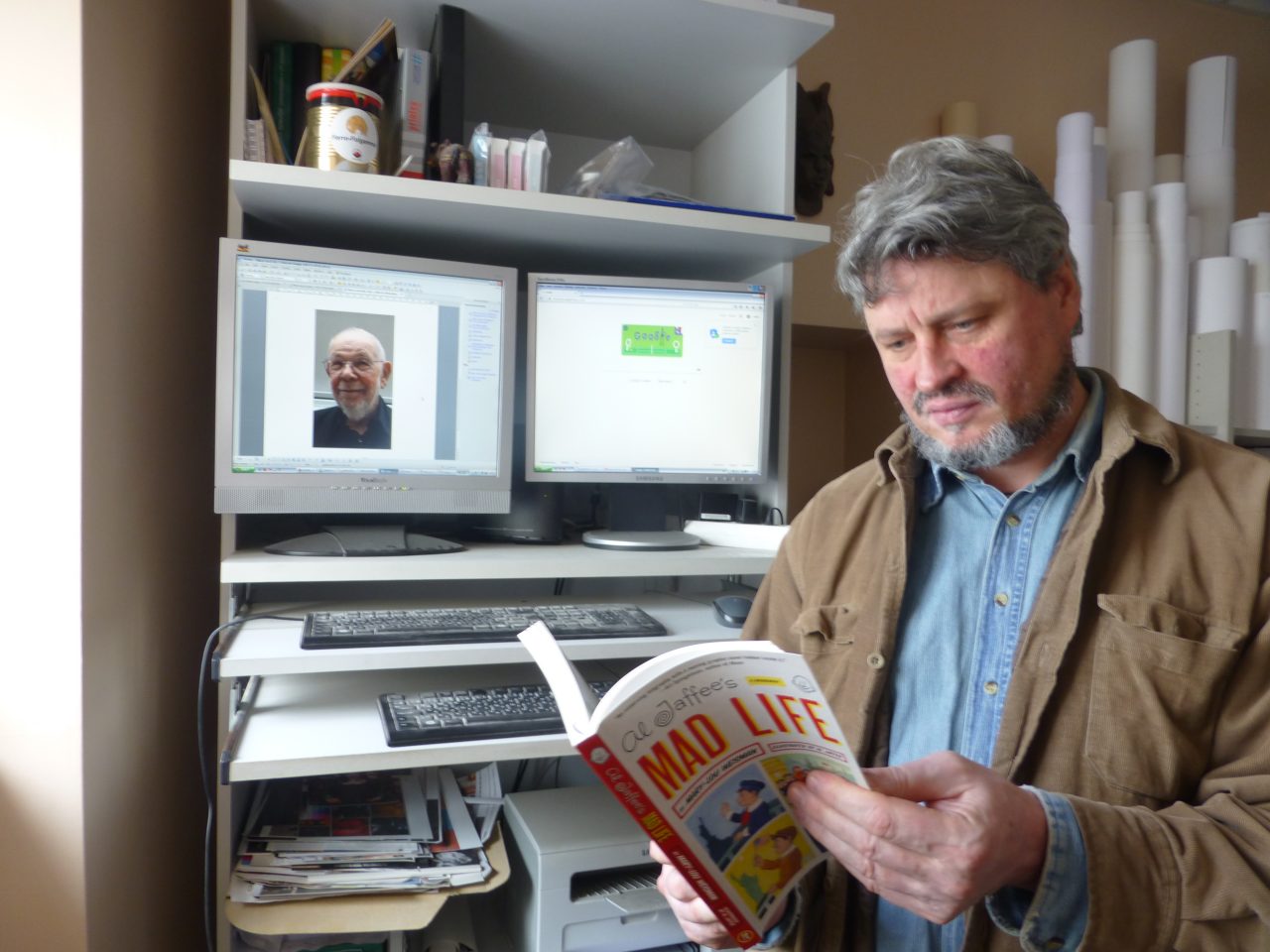 Al Jaffee celebrated his 100th birthday on March 13, 2021.  MAD Magazine noted this milestone by commissioning Tom Richmond to create a caricature of Al Jaffee standing with a huge cake and burning candles – and holding a fire extinguisher.  (See the second image in this article.

Two visitors to the exhibition recognized Al Jaffee’s illustration of the house in which Al’s mother had rented a room for his family in Zarasai in 1927.  The two visitors, a mother and daughter, recognized the house as the one that they had grown up in.  In January 2022, the daughter, Beata Cerepenkienė, contacted Aldona Shapiro to tell of her family’s connection to Al and his family and she sent photos of the house.  This information and the photos were forwarded to Al’s biographer, Mary-Lou Weisman.  In March 2022, Mary-Lou showed Beata’s letter and photos to Al, who was by then 101, and he remembered the host family well and was overjoyed that they remembered him.