My maternal grandfather, Jakūbas (Yankel/Jacov) Santockis, was born in 1901 in Kalvarija and on November 28, 1919, volunteered to serve in the army of the new Republic of Lithuania.  He served during the Lithuanian Wars of Independence in the 6th Battalion, Company No. 3, near Marijampolė.  In recognition of his service, he received a Savanoris [volunteer] medal, similar to the one shown in these photos. 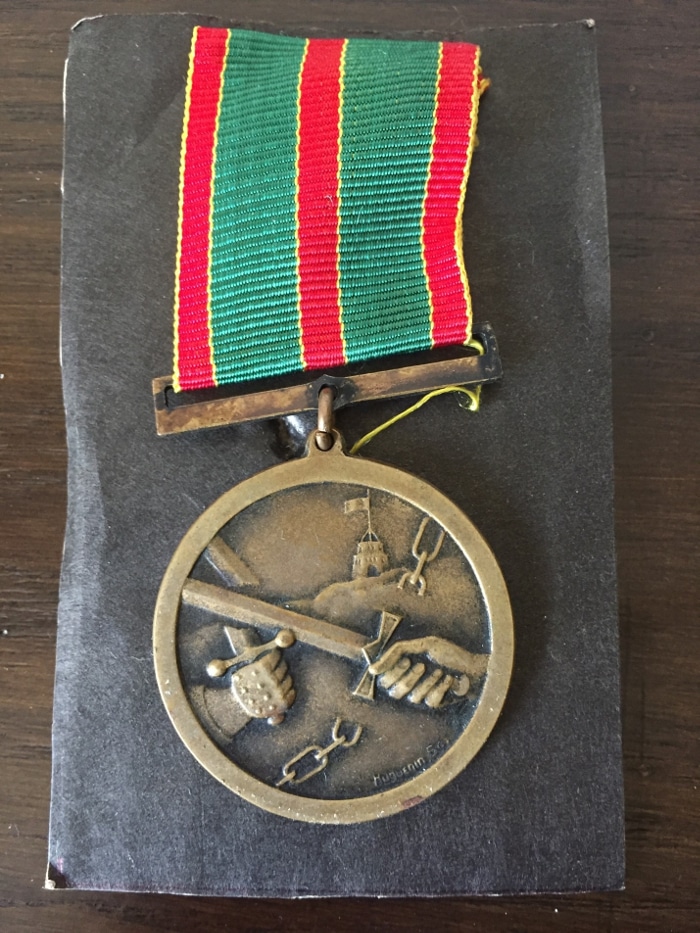 My grandfather took great pride in his nationally respected status as a Savanoris.   He always kept his medal in his pocket and proudly displayed it at annual celebrations. The medal also saved his life during the horrific weeks in June-July, 1941, when thousands of Jews were attacked and arrested and 7,000 were murdered by the Lithuanian Action Front (LAF) at the VII Fort and throughout the city of Kovno/Kaunas.

In late June 1941, after the Germans bombed the Aleksotas airport (Lithuania’s principal airport, just outside Kovno), he and his family (see photo below) tried to escape to Russia on foot.  They, and thousands of others, were arrested and forced back to Kovno’s VII Fort.  The men were separated from their families and many were taken for summary execution, including my grandfather.  When he was ordered to undress before his impending execution, my grandfather pulled his medal out of his pocket and told the Lithuanian youth who was pointing a rifle at him, “I want you to know that you are about to kill a Savanoris” as he pulled the medal out of his pocket. Evidently, this made an impression on the youth, who removed Zeide [grandfather] from the execution lineup.

A few weeks later, my grandfather appeared in the doorway of the family home in Kovno and recounted this story.  My mother, Zlata Santockytė Sidrer, ensured that this story was recorded in her testimony of survival.  Zeide survived 4 years in the Kovno Ghetto but died as a slave laborer in a sub-camp of Dachau in February 1945 – just 2 months before liberation.

During my visit to Kovno In 2017, I found and purchased the Savanoris medal shown above.  Could it be Zeide’s actual medal?  We will never know, but the memory of Zeide’s medal remains a symbol of our family’s history, of Zeide’s devotion to the new Republic of Lithuania, and, more generally, of the history of Jews in Lithuania.

Only Nechama and Zlata survived.