The significance of savanoris (volunteer)

During the First World War, the Imperial German forces conquered much of the territory that Czarist Russia had annexed in the “Partitions of Poland,” including all of the land that today is in Lithuania.  Germany urged the minorities in Lithuania, Latvia, Poland, Belarus, and other lands conquered by the Germans to declare “minority majority” states.  The Germans hoped these new countries would be economically and politically dependent upon Germany.  Following the November 1917 Bolshevik Revolution, the Russians also urged the creation of these states, albeit in the hope that they would not be dependent upon Germany.  In such a climate, numerous independent states were declared in 1918, though in most cases the German military had actual control.

The situation was changed by the November 11, 1918, Armistice of the Western Allies with Germany.  Under the terms of that ceasefire, all German forces were required to return to Germany – both on the Western and Eastern Fronts.  The result was a military vacuum in the East.  Two days later, on November 13, 1918, Bolshevik Russia invaded the new countries, quickly occupying Lithuania and nearly capturing Warsaw, the capital of the new Polish state.  The new states organized armies, virtually from scratch to defend their independence.  A brave citizen who answered Lithuania’s desperate call for volunteers is known as a “savanoris.”  The volunteers not only succeeded in pushing the Bolsheviks out of Lithuania but soon after defended Lithuania when the Polish army attempted to conquer Lithuania.

Lithuania kept its independence thanks to these volunteers and during the inter-war period they were generally held in high esteem.  In this article, Ettie (Sidrer/Santocki) Zilber, Ed.D., explains how the savanoris medal won by her grandfather spared him from execution in 1941, Jewish Volunteer Jakūbas Santockis. 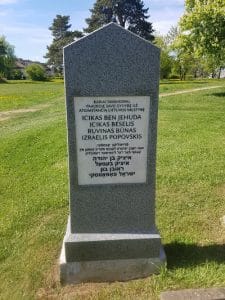 This memorial, which is dedicated to Ruvin Bun and three other Jewish savanoriai (volunteers) who died in Lithuania’s Wars of Independence, was unveiled on May 8, 2018. The photograph was taken by Ana Maisel and posted on Facebook by Hon. Amir Maimon, the former Israeli Ambassador to Lithuania (2015-2019).