On September 4, 2020, the third Ruvin Bun Award was presented by the Rokiškis Regional Museum to the Hon. Skirmantas Mockevičius, the mayor of the Jurbarkas Regional Municipality.  The mayor was honored for his initiative to establish a unique and permanent memorial for the Jewish community of Jurbarkas (Yiddish:  Yurburg).  As part of the project, the mayor retained the Lithuanian-born Israeli sculptor David / Dovydas Zundelovitch and his children, architect Anna Zundelovitch and designer Greg Zundelovitch, who created a memorial that was placed in Jurbarkas’ Synagogue Square. The memorial was dedicated in a ceremony in Jurbarkas’ Synagogue Square on July 19, 2019. 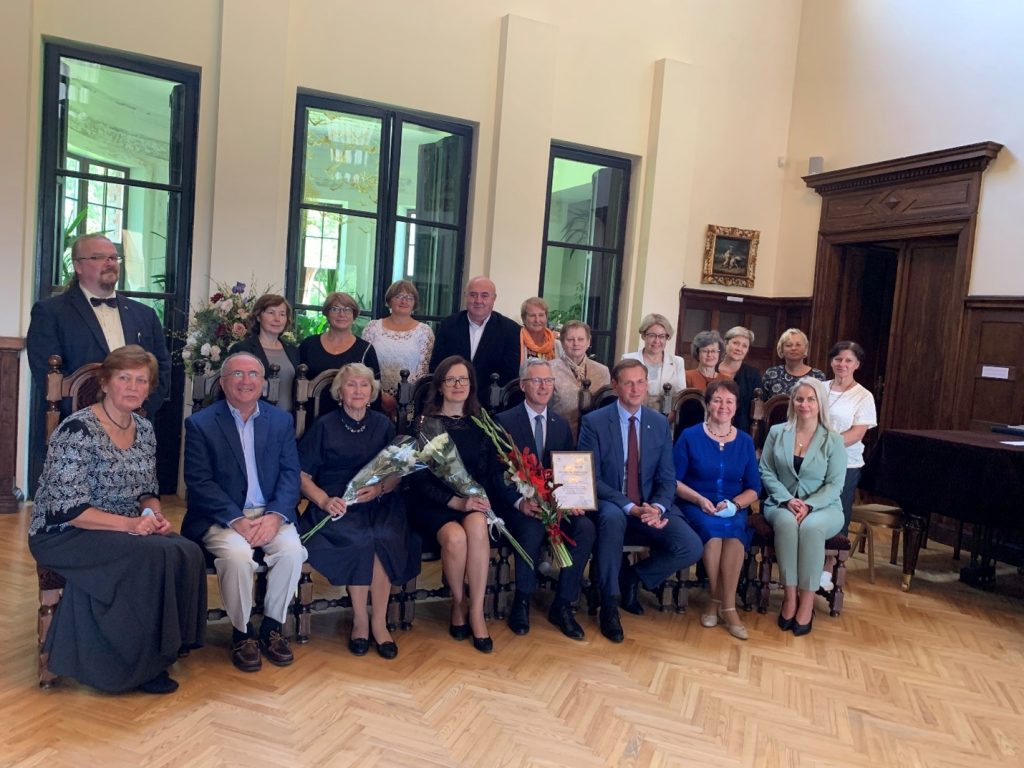 Standing, from left to right, Giedrius Kujelis, the historian of the RKM; Dalia Kiukiene, RKM deputy director; Tatjana Daunienė, the secretary and personnel manager-secretary of the RKM; Jolita Jurevičienė, the RKM’s communications and events manager; Genady Kofman, Panevėžys Jewish Community; Diana Meškauskienė, the member of the Council of the Rokiškis Regional Municipality; Marijona Mieliauskienė, deputy director of the RKM; Danutė Matelienė, head of the documents and public relations division of the Jurbarkas Regional municipality; Giedrė Spundzevičienė, museum expert and exhibitions’ coordinator of the RKM; Laima Skardžienė, museum expert and educator of the RKM; Audronė Lapinskaitė, curator and preservationist of the RKM; and Lina Daščiorienė, chief of the finance and preservation department of the RKM.

The memorial consists of several pieces of carved and inscribed basalt.  Among other things, the memorial incorporates the carved names of many of the Jurbarkas Jews who died in the Holocaust and the names of descendants of Jurbarkas Jews.  Also, several pieces are carved in the shape of buildings with internal lights that give the impression at night of inhabited structures. 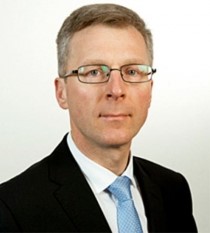 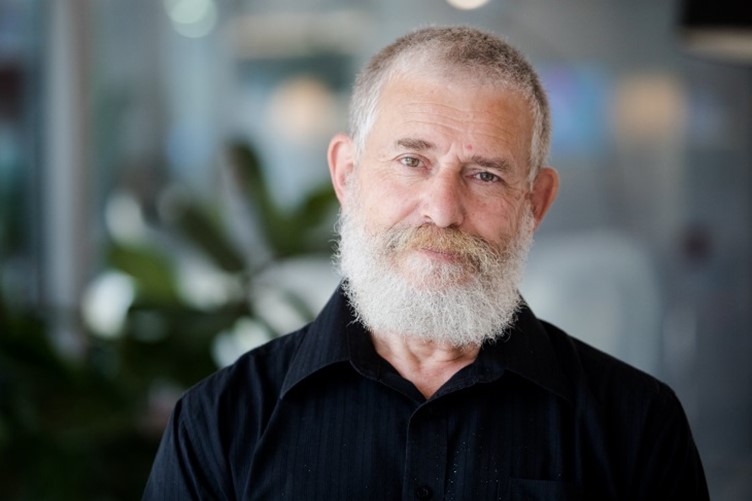 The memorial sculpture at Jurbarkas’ Synagogue Square was dedicated on July 19, 2019, with hundreds of attendees, many of whom were descendants of Yurburg Jews. 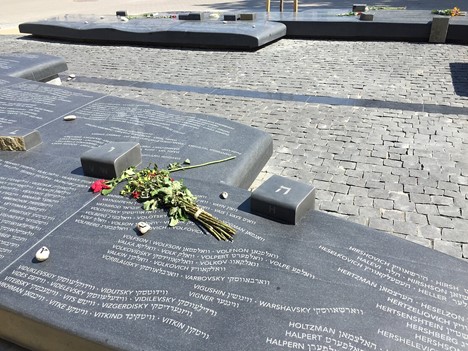 The names of the Jews are grouped by the first letter of their surnames, in this photograph the Hebrew letters  ו  (vawv) and  ה  (hey). 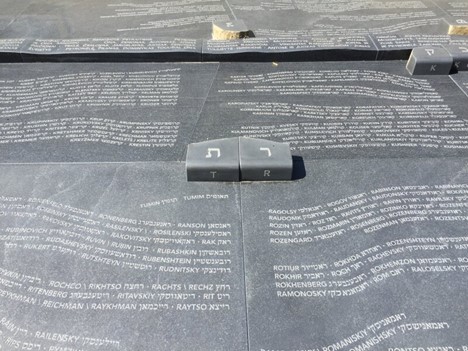 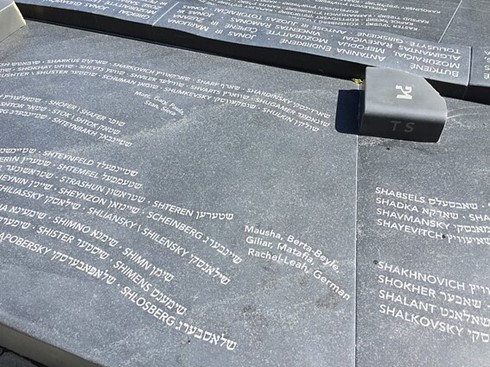 About the Sculptor, David Zundelovitch

David Zundelovitch was born in Lithuania in 1950.  His Zundelovitch ancestors had lived in Jurbarkas for many generations.  David studied sculpting in Lithuania and in 1990 he emigrated to Israel with his family.  In 1993, he founded a school of art sculpture in Israel which today is the Basis for Art & Culture Art School in Herzliya.  He is a prolific sculptor and medalist.  Among Zundelovitch’s many accomplishments is his memorial to the Jews of Moletai / Malat, which was dedicated in August 2016.

For the Jurbarkas memorial, David was assisted by his grown children, Anna and Gregory.  Over the course of three years they worked on all aspects of the project, from raising funds; choosing, sculpting, and inscribing the basalt material; and arranging for the transportation of the completed basalt sections to Jurbarkas’ Synagogue Square. 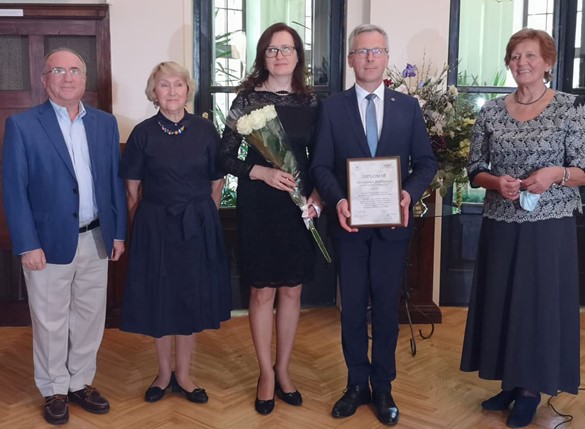 Mayor Mockevičius’ family was personally affected by the Holocaust and he is committed to never forget the fate of the Jews of the Jurbarkas region.

The mayor’s uncle was the celebrated Lithuanian sculptor, Juozas Kriaučiūnas (b. 1923). As a youth, Juozas was an apprentice to the Lithuanian sculptor, Vincas Grybas (1890–1941), who was a liberal intellectual. On July 3, 1941, as the Jurbarkas area Jews were being herded to the place where they would be murdered. Grybas was included in the group, even though he was Christian. His loyal apprentice, young Juozas Kriaučiūnas, joined Grybas. They walked together with the Jews to the Naujasodžiai woods, one kilometer out of town, where the shooting would occur. In the woods, young Juozas was recognized and given a chance to escape.

Juozas became a well-known sculptor, but his experience in the woods in July 1941 haunted him and inspired some of his work. Among them are small objects of stone and wood with the names “The End of the World,” “the Shooting of Vincas Grybas,” and “the Holocaust.” A 2013 article about Juozas Kriaučiūnas stated that, for him, “The essential value of human activity … has always been honesty, knowledge, spirituality and respect for people.”

Juozas’ family “stood out for its musicality.” His father was an accomplished violinist who played in an orchestra, his mother was a great singer, and his brothers also played music. Mayor Mockevičius himself plays the violin. To honor his uncle and the Jews of Jurbarkas, each year the mayor plays the violin at the old Jurbarkas Jewish cemetery on the anniversary of the mass murder of the Jewish community. 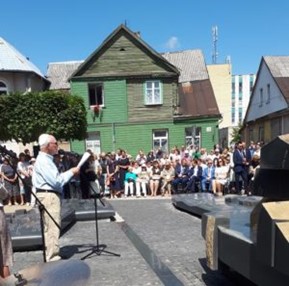 Joel Alpert addresses the attendees at the July 19, 2019, dedication ceremony.

One of the speakers at the dedication ceremony was Joel Alpert, of Boston, Massachusetts, who is both the chairman of the Friends of the Yurburg Cemetery group and the editor of the English translation of the Yurburg Yizkor (Memorial) Book. Mr. Alpert addressed the attendees on behalf of all descendants of Jurbarkas Jews worldwide, including 10 of his cousins in the audience who had traveled from Israel, Canada, and the United States. He expressed gratitude for Mayor Mockevičius’ sincere efforts to remember the Jews of Jurbarkas and specifically for initiating the Synagogue Square memorial. “I know that his heart is truly in this endeavor. I am in awe of the humanity of this man.” 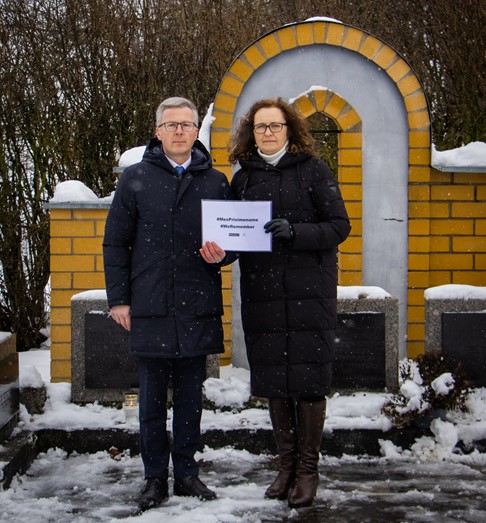 Jurbarkas Regional Municipality Mayor Skirmantas Mockevičius and his wife Ramutė, January 27, 2021, at the entrance to the Jurbarkas Jewish cemetery.  For many years, Mayor Mockevičius has undertaken activities to remember the area’s Jewish community. 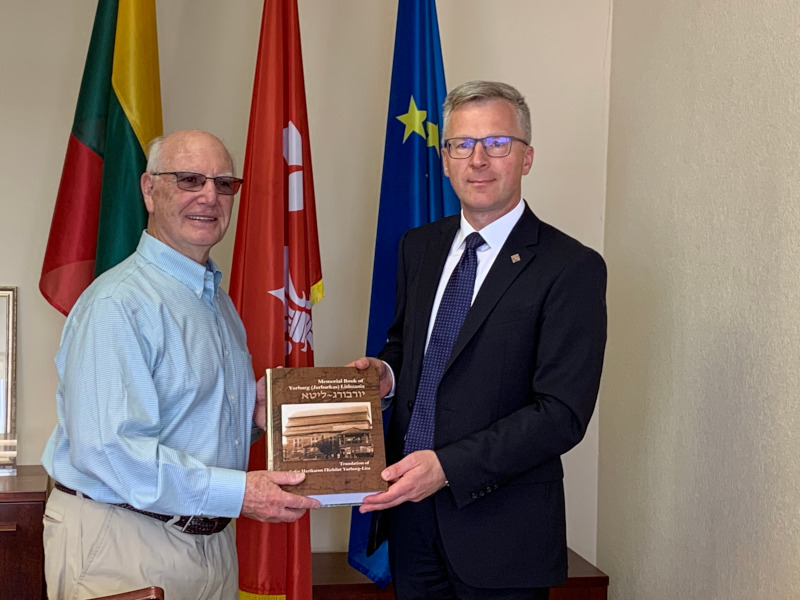 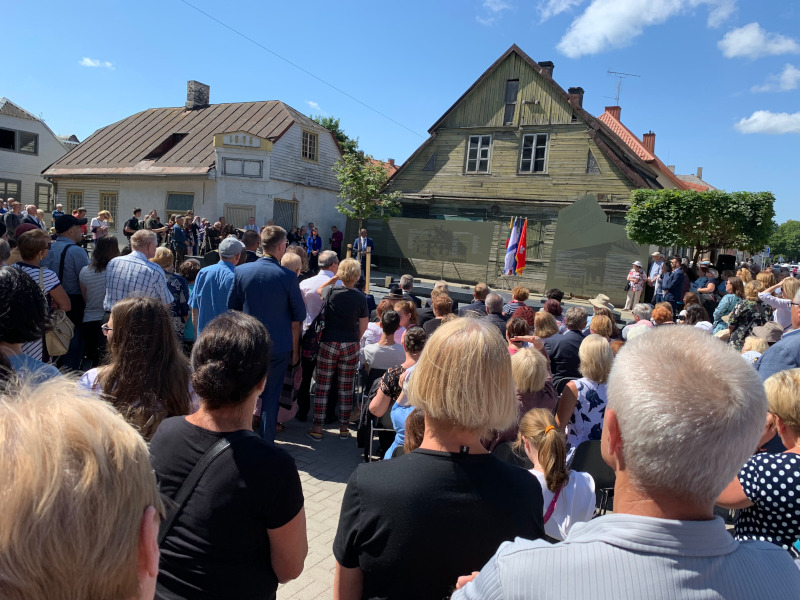 Hon. Amir Maimon, the State of Israel’s ambassador to the Republic of Lithuania, presenting his remarks at the dedication ceremony in Jurbarkas’ Synagogue Square. 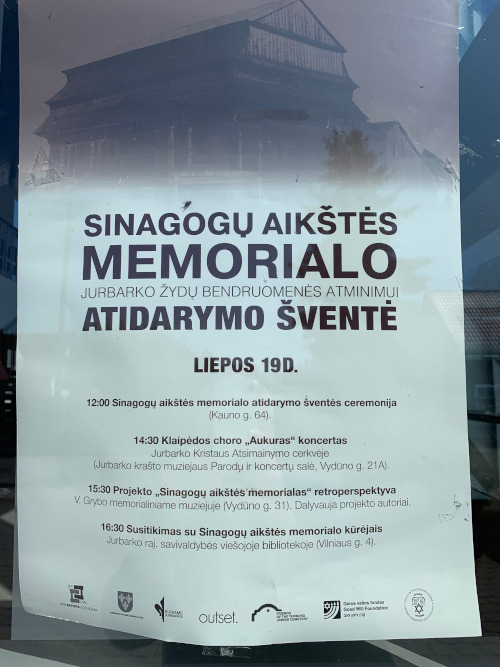 Public announcement of the July 19, 2019, ceremony to dedicate the memorial in Jurbarkas’ Synagogue Square.